An independent guide to Val Thorens

Marmots (marmottes, in French) are perhaps the most characteristic and appreciated of Alpine animals. Living between 1,000 and 2,500m altitude, they spend the warmer months eating vegetation, to build up reserves for their winter hibernation in burrows.

Marmots are rodents, within the Sciuridae family (squirrels). Their genus is Marmota. Within that genus, there are various species - for example the groundhog, found in North America, and the Himalayan marmot. This page concerns the Alpine marmot (Marmota marmota).

The Alpine marmot lives in the Alps, as well as the Pyrenees, northern Apennines, Carpathians, and Tatras mountains (Wikipedia).

Adult marmots can weigh up to 6kg (Apprenez à Observer la Faune des Alpes). They are heavier in autumn, after a summer of feeding, than in the spring when they have just finished hibernating. They can reach 42-54cm excluding the tail, which is a further 13-16cm (Wikipedia).

Marmot fur is a mixture of different shades of brown, plus some grey, and even a russet colour on some individuals. Younger marmots tend to have more grey in their coats.

Young marmot with some grey in its coat

They live in open, Alpine meadows, preferring sunny slopes which are sheltered from the wind. They dig burrows, ideally in dry soils which are not too dense and compact. The burrow complexes often have more than one entrance/exit.

When emerging from its burrow, a marmot will usually remain in the entrance for a few moments, with just is head poking out. When certain that the coast is clear, it will come out into the open.

Half-in, half-out: a marmot in the entrance to its burrow

Marmots move around and graze on all fours; they will also sit up tall to look out for danger. They have good eyesight, and if they see an approaching predator, they give an alarm call which sounds rather like a whistle.

Marmots upright and looking out for danger

Upright marmot, showing the paws/claws it uses for digging

Marmots dig with their front paws, and push the loose soil away with their back paws. Living areas at the end of burrows are lined with dry grass and plant stems. Other tunnels that lead nowhere are used as toilet areas (Wikipedia).

Marmot with dry grass for lining its burrow

A burrow is home to one family, but marmots often live as a group of several families in several nearby burrows.

Marmots eat grasses and other vegetation including flowers. They will also eat insects, spiders, and worms. They tend to feed in the morning and late afternoon, because they don't like the heat of the middle of the day (Wikipedia).

The golden eagle is the principal predator of the marmot - when they are not hibernating, marmots can account for the majority of a golden eagle's diet. Foxes, wolves, and dogs also catch marmots.

Marmots in May, looking out for predators

Marmots emerge from hibernation in spring - around mid-April, but this can depend on the altitude at which individuals or family groups live. They are at their most nervous and tentative at this time, scrambling back to their burrows at the slightest alarm.

They mate at the end of April, and after a 5-week gestation period, two or three baby marmots are born in the burrow. They are blind at first, and without fur, which grows in the first few days of their lives. They feed on their mother's milk. They won't come out until they are a little more than a month old, in July.

Summer is the time for feeding, and putting on enough fat to survive the winter. The young are in danger from predators, particularly birds of prey.

As the autumn approaches, marmots start to prepare their burrows for hibernation, bringing dry grasses and plants inside as bedding. Several family groups will hibernate together in a single burrow. The marmots build a mound of earth and stones at the burrow entrance (La Faune des Alpes). Between the 10th and 20th October, they retreat into the burrow, and block up the entrance with the earth, stones, their faeces, and some dry grass.

During winter hibernation, marmots huddle together for warmth. The temperature in the burrow will be about 6C. Their heart rates drop to 5 beats a minute, and they take 1 to 3 breaths per minute (Wikipedia). Some younger marmots may starve if the fat they have built up runs out. The marmots wake from time to time, essentially to urinate. Hibernation lasts nearly 6 months, during which time a marmot can halve in weight. 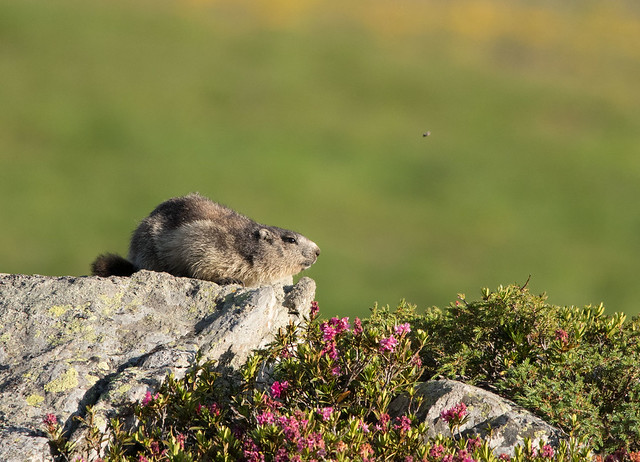 Toggle right to see all photos

Snow finches are amongst the most attractive of Alpine birds, familiar to skiers who frequent mountain restaurants. In French, they are called niverolles. They are not true finches, but actually members of the sparrow family.

Snow finches are usually found between 2,000 and 3,000m altitude, in the Alps, in other mountain ranges in Europe and Turkey, and in the Himalayas.

There are many beautiful animals and birds living in the Alps, including mountain hares, marmots, and snow finches.

Read about Alpine animals and birds.