An independent guide to Val Thorens

Snow finches are amongst the most attractive of Alpine birds, familiar to skiers who frequent mountain restaurants. In French, they are called niverolles. They are not true finches, but actually members of the sparrow family.

Snow finches: where they live

Snow finches are usually found between 2,000 and 3,000m altitude, in the Alps, in other mountain ranges in Europe and Turkey, and in the Himalayas. They thrive in places exposed to east and north west winds, where there's snow, grass, rocks and pebbles.

Snow finch at a mountain restaurant

There are greys and browns in the snow finch's plumage. When it's on the ground, and its wings are folded, you see just a little white; in flight, more white is exposed - its wings are mainly white, with dark wing tips, and there's a streak of brown along its back from neck to tail.

Snow finches eat insects, other small invertebrates, and even lichens. They are more than happy to peck up crumbs from a picnic, so can often be seen near picnic tables or mountain restaurants. They may favour you with an inquisitive, cheeky stare.

Snow finches searching for crumbs near a picnic table

Around the end of March, male snow finches begin to fly in circles and sing, in order to attract females.

Nests are built by snow finches in the second half of May, in cracks in rocky cliffs. The female lays four to five eggs, which are incubated for about two weeks. The young fledge at the start of July.

From September, the birds descend a little, to lower altitude, and live in flocks of ten or more individuals. They remain in groups during the winter, feeding on invertebrates in zones where the wind has whipped the snow away. 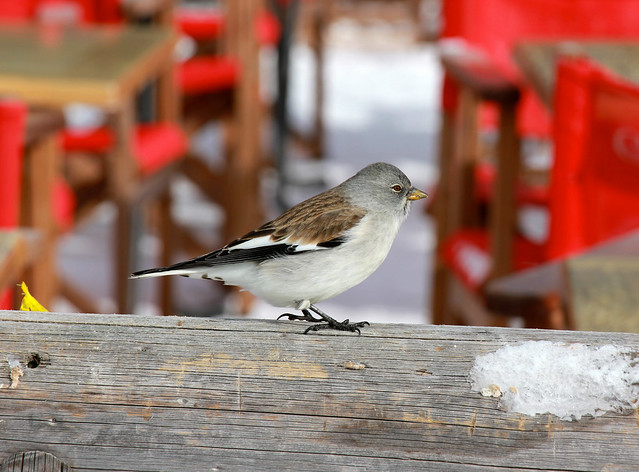 Marmottes are perhaps the most characteristic and appreciated of Alpine animals.

There are many beautiful animals and birds living in the Alps.